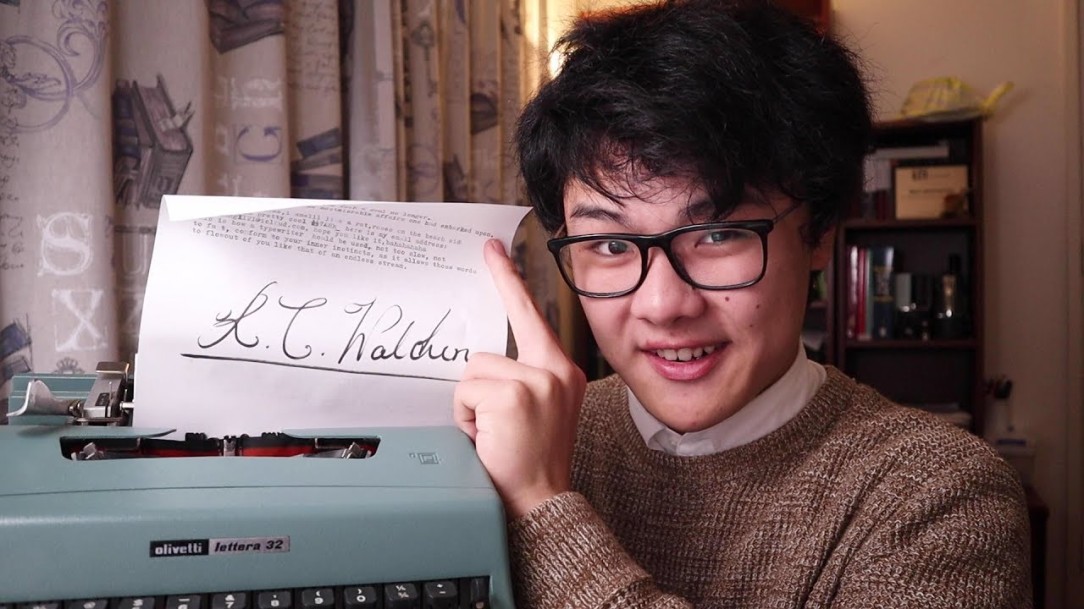 R.C. Waldun Wants to Learn Everything

By altercationmedia in Books, lifestyle on September 19, 2020October 6, 2020
No comments

The Melbourne writer has an insatiable curiosity for the world and inspires anyone who watches his videos to adopt the same attitude.

Robin isn’t a fan of the word polymath when it comes up at the start of the interview. He has mixed feelings about using the term or being labelled as one.

Before anything else, Robin makes the point of clarifying his thoughts on why this is the case.

“You never really get to be a polymath,” says Robin. “If that makes any sense. You rarely get to reach the ideal, but it’s an unceasing trend, like Maslow talked about.”

“It’s an unceasing trend toward unity and integration in your identity and also in your artistic pursuits. It’s about integrating creativity with other aspects of yourself.”

Robin’s approach to creation is holistic. He sees all aspects of his appetite for knowledge as fuel for his writing process, as well as the idea of being a ‘well-rounded’ person. He doesn’t want to stop at the surface. He wants to push through to a deeper understanding of life.

In his upcoming book, L’Academie, Robin hopes that it will encourage readers to view reality with a new lens.

“So often we fall into things,” he says. “And take them for granted because they are just ‘the way they are’, so there isn’t even the second thought of maybe there’s something fishy here.”

On the topic of his new book, Robin brings up another important issue close to his heart.

“Education is one of those things,” he says. “The system is hidden and the power that it exerts upon us isn’t oppressive, but normative.”

“Hence by pointing out some of the hidden mechanisms through the avenue of science fiction, I really want to show people that learning doesn’t have to be this process of confinement and stress, but something more joyous and organic.”

Robin’s passion for education and learning comes from his own schooling experiences. In high school he was accepted to a selective engineering school, but soon found it incompatible with how he wanted to learn.

“I read a lot of biographies of people of the past,” says Robin. “One of the books that really changed me was Leonardo da Vinci’s biography by Walter Isaacson.”

It makes sense that a biography of one of the most famous renaissance people stood out to Robin. Leonardo Da Vinci’s curious nature stands in contrast to how Robin describes the rote-learning at the school.

“I read it cover to cover throughout my first few weeks when I was really damned depressed at that engineering school. As an escape, I went into the reading. I saw the sketches on there. I saw this idea of being a well-rounded person. I thought, this is the best thing ever.”

Robin runs a YouTube channel with over 65k subscribers dedicated to this idea of becoming a ‘well-rounded person’, but his growing success on the platform didn’t happen overnight.

Robin got into making YouTube videos through his first channel, which was focused on gaming.

“I basically had my hands in the cookie jars of every kind of editing softwares out there,” says Robin. “If you just chuck me editing software I’m going to know how to use it. That was what gaming taught me.”

It was at the engineering school that Robin decided to change his YouTube direction and became interested in science communication videos. Over time, as Robin has devoted more and more time to his writing, the channel has become dedicated to the humanities and personal development.

In recent weeks, Robin has expressed an interest in moving away from presentational videos to more documentary ones.

“I am not showing the journey,” he says in one of his latest videos. “I’m not exactly showing the process of approaching my craft. Whereas this YouTube format gives off the illusion that I have everything figured out”.

“Here’s the proposal for the future. In the future, expect more documentary styled videos. I’ve sort of talked about it before but I think there needs to be a fundamental shift in how you view my content.”

“Instead of viewing it as an informative channel […] view it as a pure documentary, because let’s face it, life isn’t just about reading more books”.

Our interview continues when Robin explains that he suffers from the opposite problem to productivity slumps: he has trouble slowing down and breaking.

“I want to learn everything,” he says. “My brain just never shuts up. If I don’t consciously schedule these breaks, my brain will just go on these excursions.”

“What usually happens is that if my brain is getting too scattered I find it really hard to bring it back in when it comes to the ‘work, work’. The YouTube work and the school work. I have to schedule from ‘seven to ten, go watch a movie’.”

Robin says that one of the best things to do for consistent workflow is to create a routine.

He’s been doing his morning routine for so long that he doesn’t have to think about it anymore.

Robin wakes up and reads for an hour. After that he’ll do morning exercise, while listening to a French podcast. He follows this with grammar practice on his language app and then to round off his language learning he’ll read a page of a French novel. The very last step is five minutes of meditation.

“What’s going to happen,” he explains. “If you go through the same circuit every day, you’re going to start your day with the awareness that ‘I’ve already done crap. I’ve already done stuff. I’m ready to tackle more stuff’.”

“It really nicely slips you into this ‘I’m getting the ball rolling’. Even if you’re encountering a slump or something, the knowledge that knowing that I still made some progress today, that sometimes will be enough for you to give yourself a little break, pat yourself on the back or take a more objective approach to how you’re going to spend your day.”

It’s Robin Waldun’s practical approach to self-betterment that can help take away the fluctuation of creative energy, which can inhibit the process.

“If you’re not a professional artist,” he says. “You work whenever inspiration strikes, but if you become a professional, if you treat this thing really seriously, it’s kind of like a day job really. You’re just taking some time out of your day job to do this other creative day job.”

Over time, this discipline and consistency is what Robin has anchored his development onto as an author, YouTuber and overall ‘well-roundedness’. This dedication to craft is how he’s found his space as a creative.

“You don’t find your niche, really, by coming up with a plan. By thinking in your room. By philosophising on an armchair. That’s not how you find your niche. You actually have to get your head in there to do stuff.”

Comment below and let us know what you’ve learned from this article.

Want to submit an article? Email us: altercationmedia@gmail.com

View all posts by altercationmedia